A Glimpse Of The Eternal

The tenth Criss Cross album with David Binney’s imprimatur, A Glimpse of the Eternal, is, he says, “completely different than anything I’ve ever done – chilled out, an honest and pleasant vibe, nothing too complicated or intense.”

If that self-description seems at odds with the intense, complex tonal personality that Binney has presented on his 30-album discography since 1990 ... well, that was his intention. He explains: “Initially, I wanted to do something like those almost commercial records from the ’50s or ’60s or ’70s, like a Gene Ammons record I have where he plays these ballad- like tunes for 2½ - 3 minutes.” He adds: “All the guys were super-enthusiastic about doing a straight-ahead ballads record.”

But as Binney researched and culled repertoire, he changed course. He decided to incorporate a few “more energetic” tracks and to record some covers of “obscure tunes that meant something to me.” 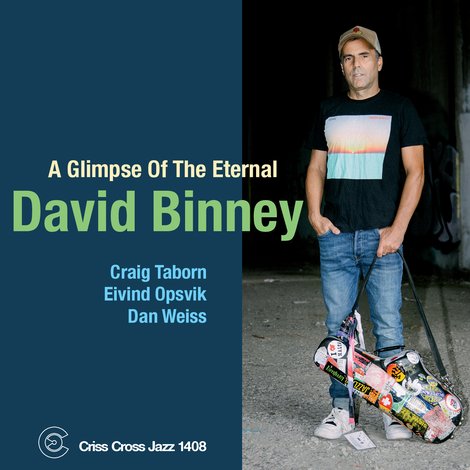