Noah Preminger brings with Sky Continuous, an exceptionally compelling trio recital with bass virtuoso Kim Cass, who has performed on 10 of Preminger’s 11 prior albums including Criss Cross releases Genuinity (Criss 1397) and After Life (Criss 1404), and drumset icon Bill Stewart, who had never before shared a bandstand with Preminger.

Sky Continuous came to be when Preminger reached out to Jerry Teekens, the namesake son of Criss Cross founder Gerry Teekens, who passed away in 2019. “Before Gerry died, we were talking about doing another record together, and he said, ‘You would sound great with Bill Stewart. Have you ever played with him?’ I said, ‘No, but I really enjoy his playing and that would be nice.’ So he said, ‘Why don’t we do a trio record with Bill and Kim Cass?’ He knew that I loved Kim’s playing. After Jerry decided to continue the label, I told him about his father’s suggestion." 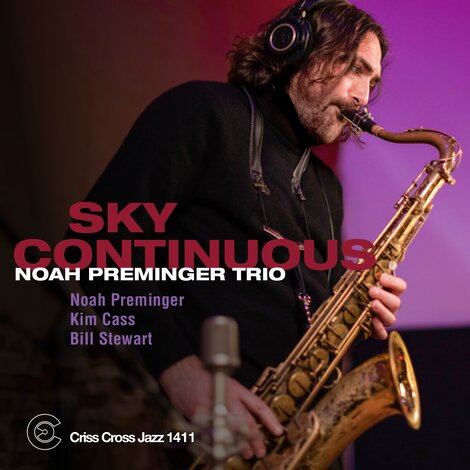